While we argue over who has the more sustainable diet, agriculture continues to turn fertile earth to desert. The food we eat, whether it is bacon or tofu, is based on an ideology of control of the land. All food has blood on it. —But, it doesn’t have to, choose a regenerative diet instead.

Our food is destructive. Every piece of food we eat has altered the earth in some way. To reduce our devastation, we form rigid identities around our food choices. We belittle other identities and struggle for the moral high ground:
“You’d save more water by not eating a pound of meat than you would if you didn’t shower for six months.”
“The vegan diet wastes valuable land that could be used to feed people.”
Like-minded folks throw park picnics and dinner parties featuring their superior diets, reinforcing their worldview.
We wear badges of honor celebrating our caveman-like diet or our blood-free-meal.

While we argue over who has the more sustainable diet, agriculture continues to turn fertile earth to desert. Instead, we need to choose a regenerative diet.

The food we eat, whether it is bacon or tofu, is based on an ideology of control of the land. All food has blood on it.
But, it doesn’t have to.
Farms can create wildlife habitats and restore water cycles. Nutrient dense food can pull carbon out of the air and sequester it in the earth. Our money can support farmers who are treated fairly and work to build healthy soil. And yes, it can be done while feeding the world. But first, we need to change the discussion.

The Cows of California’s Heartland

Anyone who has driven the I-5 between Los Angeles and San Francisco knows it well. First, you smell it. Then, you roll up your windows to keep the flies out. The cows that come into view are not the same ones pictured on milk cartons. These cows are languid and dirty. The sun bakes them (summer days regularly reach above 100 degrees) but there is little shade. Instead of grass, the cows stand in mud and manure. 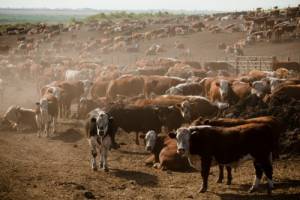 There is a huge ranch that sits in the middle of California’s Central Valley. This 450-mile long valley provides over half of the United States’ fruits, vegetables, and nuts.
The valley is arid, dusty and hot. The only visible water is sprayed from enormous skeletal irrigation machines rolling silently through the fields. Still, you are reminded of the importance of water, and the political fight over it, everywhere. Billboards line the interstate reading “No Water = No Jobs.” Another sign features a young boy scratching his head with the words, “Is Growing Food Wasting Water?”
The lack of water has resulted in farmers digging deeper wells. The strain on the water table is causing some parts of the Valley to literally sink two inches per month.
Despite the wealth generated by the Valley’s corporate-owned farms, the residents are among the poorest in the nation. There is little work opportunities outside of low-wage farm labor mostly performed by immigrant laborers.
Many residents depend on groundwater for their drinking water, much of which is contaminated with nitrate and legacy pesticide, two byproducts of industrial farming. Residents close their windows on windy days to keep out the pesticides and other VOCs swept into the air from the naked farmland.
The World Health Organization has identified The Central Valley as having the worst air pollution in the United States. 1 in 6 children in parts of the Central Valley have asthma.
It is easy to look at this centralized ranch through a passenger-side window and hate it. It is more difficult to hate what surrounds it because you might assume the Valley has always been like this.
But it hasn’t.

The Floweriest Piece of World 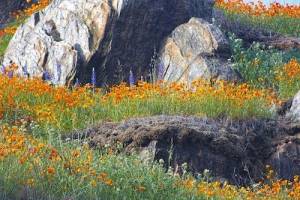 The Sierra Nevada Mountains border the western edge of the Central Valley. The mountain’s rivers, carved by glaciers, have carried rich sediment to the valley floor for 5 million years.
Rainfall and melted snowfall from the Sierra Nevadas once covered the Valley floor in extensive wetlands. Tulare Lake, now dry, was the largest lake west of the Mississippi. Vernal pools, bodies of water that appear during the winter and dry up in the summer, supported enormous numbers of waterfowl. As these pools dried up in the spring, wildflowers would mark their spot. John Muir described the Valley as, “the floweriest piece of earth I have ever walked.”
Water-loving willows bordered the wetlands. Stretching out from there were riparian forests of sycamores, cottonwoods, elders and valley oaks.
The drier areas of the Valley were covered in some of the most diverse grasslands in North America. These grasslands supported herds of large mammals like pronghorn antelope, mule deer and tule elk. Wolves, mountain lions and grizzly bears also made the Valley home.
This particular ranch is not responsible for the decline of the Central Valley. It was caused by carrots and cauliflower, dams and row crops, almonds and ploughs.

Human agriculture, whether it is goat herding or tomato planting, has desertified land from the Middle East to the Central Valley. Debating whether a vegan diet is more sustainable than a grass-fed beef diet is like debating whether it is more harmful to hold your hand in a pot of boiling water or on a hot stove.
When we talk about the sustainability of our food system, we talk about doing less harm. We are fascinated by a burrowing worm’s power to fertilize soil. We admire the bear for spreading the seeds of beneficial plants. We celebrate a beaver’s dam for its ability to restore wetlands. But, when we talk about humans working soil, eating food, or building homes, we call ourselves eco-conscious if we cause a little less damage than our neighbor.
The mantra of this thinking is “sustainability,” literally meaning, “to maintain at the current rate.” This does not inspire. This does not stop the deterioration of the earth.
Instead of thinking sustainably, let’s begin thinking regeneratively. 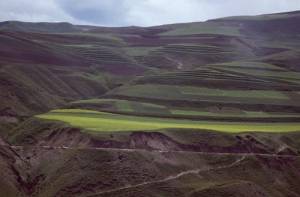 China’s Loess Plateau was one of the most overgrazed, soil eroded places in the world. The degradation of the land led to widespread poverty. Through the implementation of regenerative agriculture, and ecosystem restoration strategies, an area the size of Switzerland has been restored. Perennial vegetation has increased from 17 to 34 percent, the flow of sediment into the Yellow River has been reduced by 100 million tons each year, food production increased and average incomes almost tripled.
Farmer Gabe Brown began farming in North Dakota almost 30 years ago. His land, having been conventionally farmed, was low in fertility, had poor water retention and native grasslands were in poor health. He implemented no-till farming, holistic grazing, and other regenerative practices. Now, his soil organic matter has increased from 2% to 8%, the soil infiltration rate has increased 16 times, and his corn yield is 20% higher than the county average.

Adopting an identity in the food debate gives us a set of rules to follow and a feeling of superiority. Some diets are less harmful than others and can be a good start. However, when we slap a label on ourselves and declare our work done, we put on blinders that don’t allow us to see the impact of the banana we are eating. We become distanced from real solutions.
It took us 150 years to transform the Central Valley, I believe we can regenerate it, and other parts of the earth, in the same amount or less time. It is time to take our hands out of the fire and put them to work. It’s time to think differently, it’s time to think regeneratively.
⠀⠀⠀⠀⠀⠀⠀
⠀⠀⠀⠀⠀⠀⠀ 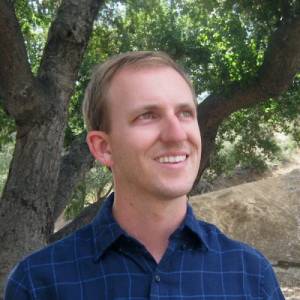 ⠀⠀⠀⠀⠀⠀⠀
About the Blog Contributor, Rick Perillo:
Since graduating from California State University, Northridge in 2006, Rick Perillo has been exploring and teaching ecological gardening practices. He has worked on organic farms in New Zealand and Colorado, as well as earned two Permaculture Certificates, his Master Gardener Certificate, and Certificate in Global Sustainability from UCLA. Rick currently is designing and teaching a garden-based curriculum for a progressive school in Calabasas as well as running the website www.thecarrotrevolution.com

It’s Time to Bring Back the Victory Garden 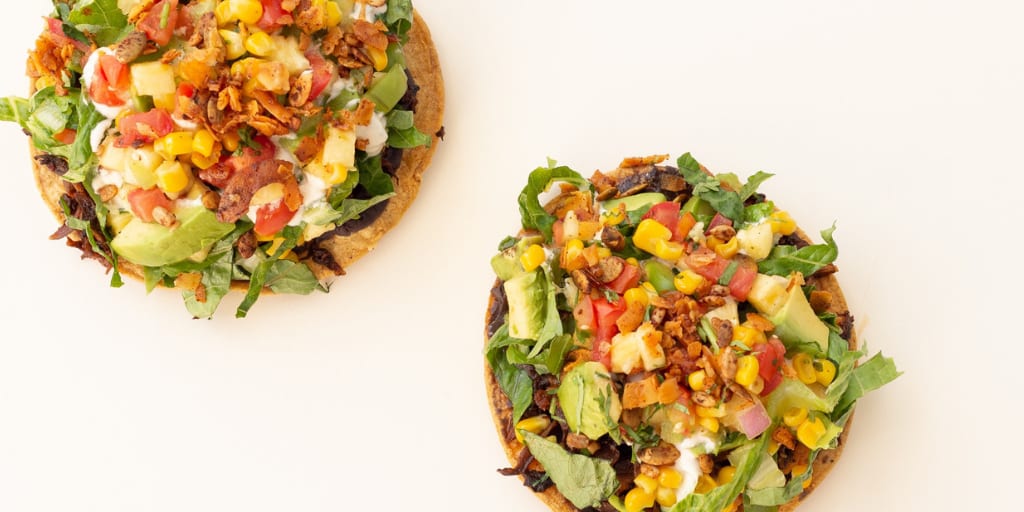 The Biggest Little Farm Offers the World a New View 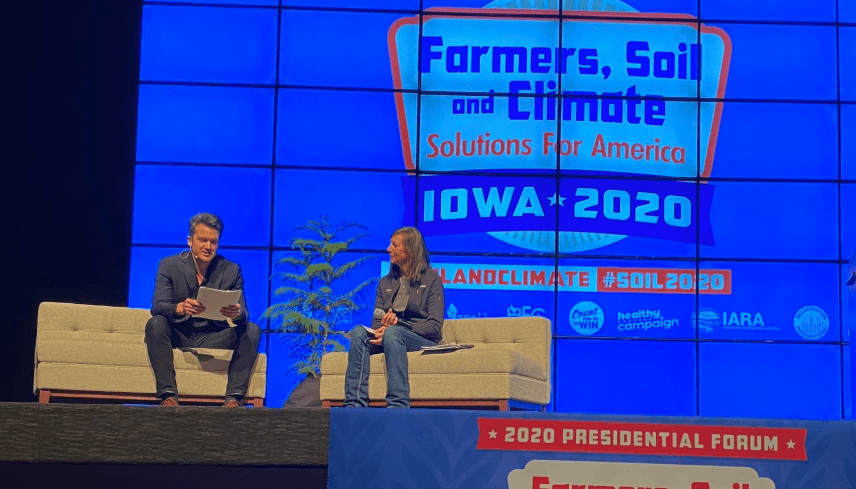